This is a guest blog by the less than legendary, Louis C. Monteverdi 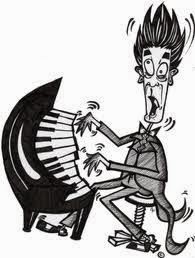 As a pianist performing regularly in front of live audiences (well, at least they claim to be), I still struggle with hand jitters, wrong notes, inaccurate rhythms and sudden sonorities of unknown origin.

While I know of no real remedies or telethon-type activities related to alleviating this aggravating affliction of unaccountable nerves, I can offer the following five tips in the hope that they may prove useful in times of classical piano’s annoying nuances.

Avoid increasing your stress level by leaving sufficient time for a preparatory period of relaxation. Relax, compose your thoughts and slowly exercise your fingers with unrelated abstract, technical studies till you have achieved a certain comfortable level of digital dexterity.

Don’t come early, fool!  That will only make you even more uptight by creating a misguided sense of importance about the whole stuffy business. Better to come a little late. Have a couple of smokes, a couple of beers.  Too bad, if people get pissed off and decide to leave because it’s already 8:15PM.  Screw ‘em!  Keep repeating to yourself “Screw ‘em. It’s just not that important”.  Relax; the whole thing’s just this side of being a complete waste of everybody’s time.

Screw Beethoven, the ugly son-of-a-bitch. Clearly, the guy was never successful enough to afford a facial or get a decent haircut. What’s that, lady, I was hitting wrong notes?  What do you expect, the guy was frickin’ deaf when he wrote this damn thing!  Give me a break!

Sure I’m nervous.  Wouldn’t you be if you had to perform on this reject from a down-market Salvation Army post?  I mean, I might have warmed up, but I ran out of time while I was Gorilla Gluing  all the broken keys back on, for cryin’ out loud!

Find a restaurant with a big room full of noisy people whose voices bounce off a carpet-less, slate floor, utterly drowning out the sound of your dwarf baby-grand with zero amplification. All that’s missing is a black cape and hood - and a Lone Ranger mask.  Then you can be nervous all you want.

Posted by Charlie Greenberg at 5:46 PM No comments:


We celebrate both Scott Joplin and Jelly Roll Morton as American originals and classicists. Joplin (1867-1917), as the “King” of classical ragtime composers and Morton (1890-1941), as a progenitor of what has come to be considered early jazz, both as composer/arranger and (thankfully),  recorded performer.


Joplin was a classicist in the most traditional and technical sense.   His piano writing adhered to European music theory practices in harmony, voice leading and compositional form.  (For example, there’s little difference between the highly, formulaic musical structure of Joplin rags and Sousa marches: AA/BB/A/CC/DD).


The magnificent results of Joplin’s’ genius was his blending  of European classicism and African American derived folk melodies -  both inextricably bound to  a uniquely  subtle and sophisticated binary, ragtime syncopation.  (On occasion, there is even an early suggestion of blue-notes  - flatted 3rds, 5ths - but these are always supported by conventional harmonies or quickly resolved as non-harmonic tones).


“Euphonic’s Sounds” (1909),  comes from a particularly rich year of Joplin rag composition. It also coincides with the beginning of Joplin’s obsession to write his grand, ragtime opera, “Treemonisha".   By 1907, Joplin had moved to New York City in order to be in a more compatiblle cultural environment that might artistically and financially support a staging of “Treemonisha”.


All this is to say,   if you’re familiar with Joplin as the composer of “Maple Leaf Rag”, “Easy Winners” and “The Entertainer” – you may well be surprised by Euphonic Sounds' very ambitious and surprising composition.


Clearly, Euphonic Sounds is a rag. It adheres to Joplin’s (and generally), classical ragtime's consistent use of sequential  16-bar strains.  Certainly, its 4-bar intro and first theme sound fairly much like business as usual.


The second theme, however, is where the traditional ragtime wheels come off, and even the initiated may think they’re losing count.  Yes, there are plenty of two-bar repetitions as befitting Joplin’s 16-bar strains, but in “Euphonic Sounds”; they serve an entirely different purpose.


To illustrate this point, let’s look at the arch-typical second-strain of  Joplin’s 1908 rag, “Fig Leaf”. 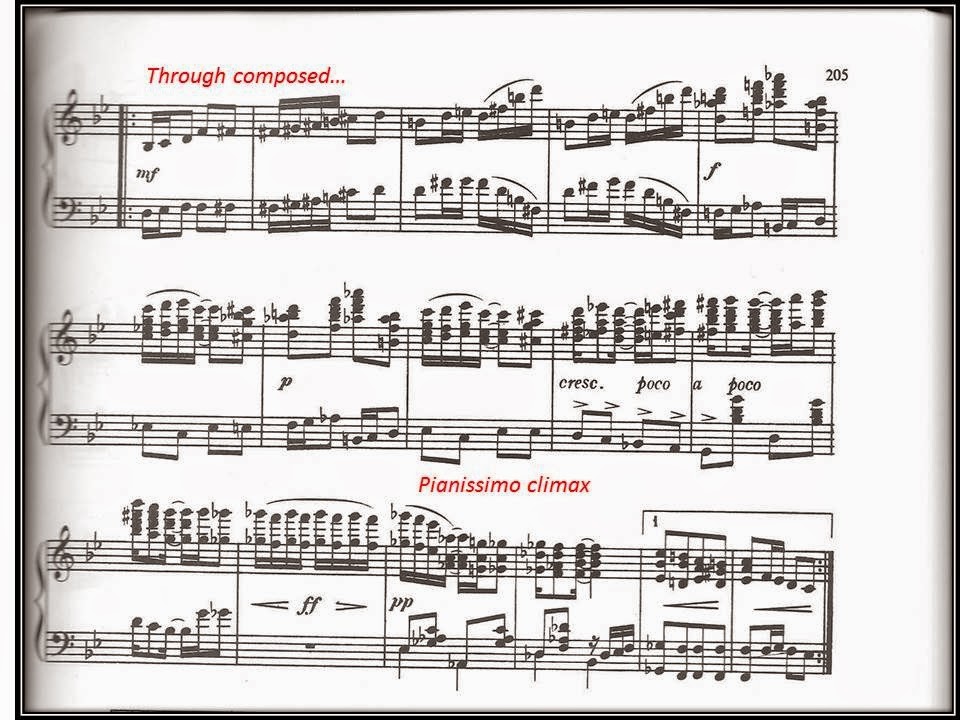 Additionally, as Rudi Blesh and others have noted, there is a suspension of the traditional bass-note-chord construct, a hall mark of not only ragtime in general, but upcoming stride piano playing.


Stride pianist, James P. Johnson (for one), cited “Euphonic Sounds” for its modernism.  But while mind reading should never pass for scholarship, was Joplin’s rebellious  2nd strain  in Euphonic Sounds  more focused on expanding his concept of ragtime into another form of classical music, or  even so-called, serious modern music?

And what was Jelly Roll Morton thinking when he imposed the descending, parallel  voicings  of disorienting  dominant 9th chords in 1929’s “Freakish”?

Was Morton, on the cusp of being passe, thinking of cornetist, Bix Beiderbecke’s 1926 foray into impressionism called “In a Mist” (played quite well, actually, by Bix on piano)?  Or, was he simply  trying to say,  “Don’t tell me, I get this modern stuff!”  And if he did get it, he may well have signaled  he didn’t much care for it my calling his composition “Freakish”.


Don’t get me wrong.  I love “Freakish”, and thanks to the most excellent transcriptions of James Dapogny (in this case, transcribed from Morton’s 1938 Smithsonian recordings with Alan Lomax,  at a more relaxed,  “Don’t tell me, I get this swing-thing” tempo),  I very much enjoy playing it.

But was Morton trying to sound modern, or was he mocking it?   After all, Morton’s  “Freakish” conceit was about juxtaposing the dominant  9th   chord sonorities with more and longer sections based on more like ragtime-like lyricism and harmonies.


But for Morton, "Freakish" was another tune of many in his club date and recording career. Joplin’s Euphonic Sounds  might have been a 16 bar cry for a different kind of recognition.

Posted by Charlie Greenberg at 3:55 PM No comments: