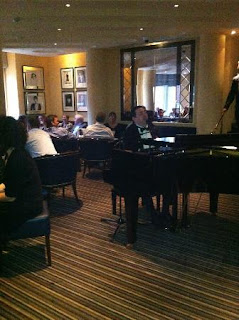 Thinking back to my youth in the 1980s,  my issues with being a successful piano player have always revolved around a lack of ambition, a lack of dedication, a lack of good timing (no pun intended), and - well – a severe lack of talent.  A lethal career cocktail (if you will), that nonetheless never stopped me from playing low-rent weddings, receptions and restaurants.

But in the spring of 1983, it stopped me dead in my tracks from being seriously considered for admission into Julliard, Manhattan School of Music, Manes School of Music – and even my safety school - the music department at Bronx Community College.

After this unfortunate parade of highly deserved, missed opportunities, I had zero intentions of attending any college as a Liberal Arts Major.  I mean, you’re a liberal arts major either because you can’t decide what to do with yourself, or somebody else has decided what you’re not going to do with yourself.  Just my opinion, mind you.

But my father, Frankie Monteverdi - he saw it differently.  “All the Monteverdi’s have been well-schooled in their trade”, he told me. “You are – well, let’s face it, Louie - a cocktail pianist.  But you should be the best goddamned cocktail pianist you can possibly be.”  Frankie then proceeded to tell me about the Brooklyn College of Popular Professional Musical Services.

BCPPMS, in fact, had a major in Commercial Club Dating – and even though it was late June – they were still auditioning.  So, Frankie (I always called him Frankie), paid my application fee and set me up with an audition date in mid-July.

BCPPMS quickly responded with a letter congratulating me on this golden opportunity to audition for them - and included a copy of the audition requirements:

All Commercial Club Dating performance auditions, with a concentration in Cocktail Piano, will require the auditionee to prepare from the following cocktail piano repertoire:

My audition, as I later found out, was to be conducted by four faculty members. First, there was Marie Canto, the Chairwoman (I guess you would call her), of the entire Commercial Club Dating Department.  Next, the very elderly Lawanda Smith who taught Requests 101 and 201.  Next was Professor Jan Minisky, who spoke with a thick Polish accent and would later become my private instructor and mentor.  And finally, this very uptight guy named Steve Cosmos, who taught jazz and improvisation studies.


The audition itself was rugged. First, the piano was decidedly out of tune and several keys – in commonly used areas – were broken.  When I mentioned this, the jury smiled, and Ms. Canto simply said “yes, of course.”


During “Laura”, my ballad selection, the two ladies talked and laughed loudly (a downright cackle, I’d say), while Prof. Minisky purposely hit his coffee mug with a big metal spoon.  Steve Cosmos lit three cigarettes, a cigar – and was stuffing his pipe bowl as I finished the first number.  But at the end of it, the jury nodded approvingly - except for Steve Cosmos, who muttered something like, “swings like a rusty gate”.

My second number (“Stairway to Heaven” – a shrewd choice on my part), was subjected to the same spirited lack of attention and discourtesy.  Except this time, Lawanda Smith sang along, way off pitch (and the wrong lyrics, to boot), while Prof. Minisky suddenly (and this – believe me - I was in no way expecting), turned on a cappuccino maker.

For my final selection, I hit them up with “For the Good Times”, another good choice to be sure.  Good for talking over, since the tune has more silence in it than actual melody.

We were cool with the convivial small talk, until Steve Cosmos said, “Can you play, “Doctor Zhivago”.  Well, of course, I knew it was a trick question -  ‘cause there ain’t no such song.  Plus, he had this devilish gleam in his eye.  But, I was concentrating on my playing, I was nervous – and my eyes were starting to hurt from the smoke.  So, I simply said, “I’m sorry.  I don’t think I know that one. Is there something else you’d like to hear?”   Do I have to tell you how that response went over like a lead balloon? “O-kay”, Maria Canto said, very low key.  A big pause.  Then, “thank you very much, Louis.  We will be contacting you regarding our decision.”

Of course, the song was “Somewhere My Love”, or “Lara’s Theme”.  “Even I know that one,” Frankie later lamented.  But the news was not bad for long:

“Congrats, Louie”, beamed Frankie, only a few days later - and as proud as he could be.  “You’ve been accepted!  On probation, y’know.  But you’ll get through that with the right amount of hard work, right?”

Physco Therapy I (The exploration of strengthening cognitive concentration skills and fortification of self esteem and the suppression of undue sensitivity).

Physco Therapy II (Making astute repertoire choices based on the analysis of room ambiance and the diner’s mood).

But it was Prof. Jan Minisky who provided me the support, motivation and intestinal fortitude I needed to succeed.  When not testing me with the sonic intrusions of broken glasses, dropped diner plates and very smelly and sonorous belching, we had very serious and deeply philosophical conversations regarding the art of cocktail piano.

Me:  Professor, when does a cocktail pianist stop competing with the all extraneous noise?

Prof. Miniski:  Never.  You are one wit ze noize.  Vy?  No noizy cocktails, no customers.  No restaurant, no bar - no cocktail pianist.  No cocktail pianist, no money. Zo, vat are ve doink here?

Me:  But, isn’t there a time – or a place - where you should not accept a piano job?

Prof. Miniski:   No.  If you must, you perform in a sport’s bar with drunken men yelling without meaning at big TVs.

Me: But then I’m forcing – forcing all the time and - you know - always banging the keyboard to be heard.

Prof. Miniski:  Then, you must make the choice.

Prof. Miniski: Yah. Electric piano.  Then you vill turn up amplifier to be heard, without forcing the quality of ze tone.

The Professor also enhanced my knowledge of handling requests.  For example, if the request was “Memories”, by Barbara Streisand, the song was actually “The Way We Were”.  If they were asking for a song by “Frank Sinatra”, they meant any of the songs he was most famous for singing (not writing, of course).  And, if they said play, “Phantom of the Opera”, they probably just wanted to hear, “All I Ask of You”.

In May of 1985, Frankie proudly attended my graduation recital.  He sat grinning ear to ear as the audience, comprised of fellow students, faculty members, parents and custodial help, couldn’t possibly have been more disengaged.

Toward the end of my performance, I saw Steve Cosmos rise from his chair and start walking toward me.  As he leaned distractingly right into my face, he insisted, “Hey, can you play “Clockwork Orange”?

“Sure”, I replied.  “Just as soon as I’m done with these requests.”

Steve lit a cigarette, gave me the thumbs-up, and walked away.

Posted by Charlie Greenberg at 11:33 AM