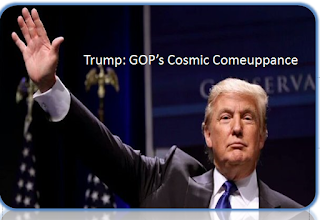 Donald Trump, whose unbelievably well attended campaign stops have morphed into his own brand of group therapy (How wonderful am I? C’mon, everyone, count the ways!), is dangerously close to becoming the Republican presidential nominee, handily losing the general election to Hilary Clinton and giving the GOP a richly deserved, cosmic comeuppance.

And I say this at the risk of Trump turning my neighborhood into a Scottish golf course.

Finally  - Trump’s primary opponents, who have long since known better (which still excludes a few), are tepidly stepping up to the political plate and hitting back some carelessly pitched soft balls Trump has let fly about Muslim  national registries and  9/11 fantasy celebrations.

Well, good for them.

But you still have to wonder where any of these people were in 2012 when Trump decided (as a potential GOP presidential candidate), it was in his best political interests to go after the Muslim-in-Chief.

A validated Hawaiian birth certificate?  A verified certificate of live birth?  No credible evidence to prove Obama was born in Kenya?  “I’m prepared to take the president at his word”, John Boehner magnanimously intoned, helping to propagate a talking-point that would side-step the question, keep the right-wing base delusionally happy, and enable fellow Republicans to commit a sin of omission in order to maintain a perceived political advantage.

Let’s be clear, if  there ever was a remote chance Obama is not a U.S. citizen, and an illegal occupant of the White House, the Republican congress would have relentlessly investigated, impeached and then double-dared President Joe Biden to pardon the disgraced, ex-president in order to avoid excessive jail time.  And they would have been right to do so.

That’s what so galling about Trump’s superficial and self-serving exploitation of an explosive, constitutional crisis.

In fairness to Trump (and you have to “treat” Trump “fairly” lest he run a third-party candidacy), he did not originate birtherism  or the birther movement.

And yet, even though he thoroughly discredited himself four years ago from being taken seriously as a presidential candidate today- here he is again.  This time, however, instead of Obama who was more than his match, he’s putting  his reckless and hateful hands around every minority group that might enable his campaign  For Trump, brown is the new black.

In 2012, the GOP enabled Trump by not calling him out on the bizarre,  birther nonsense.  2016 is their chance to make amends and save their political hides.

Unless, of course, they prefer to watch the next Democratic administration from outside that “great big, beautiful wall”.
Posted by Charlie Greenberg at 6:09 AM

Email ThisBlogThis!Share to TwitterShare to FacebookShare to Pinterest
Labels: Trump