The Inflation of the Standing Ovation 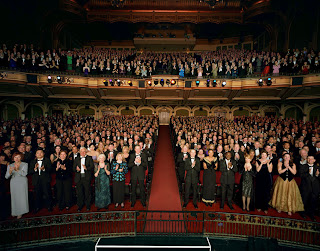 Early on, I had the perception that standing ovations were infrequent, and decidedly well deserved.   I assumed people only rose to the occasion for extraordinarily profound and exceedingly brilliant performances.  I remember (and please excuse the name dropping), standing ovations for Vladimir Horowitz and Artur Rubinstein.  I recall being enthralled by - and eagerly standing for - Angela Lansbury and Len Cariou in Sweeney Todd.   I remember rock concerts in Madison Garden where the applause was thunderous, but the vast majority of people remained seated – stoned or otherwise.

So, based on my own recent and modest sampling, why does it seem in the last couple of decades that audiences give-up standing ovations with the regularity of a gesundheit - or a fifteen percent-tip?  Which is to say, I’ve become highly suspect of the entire convention for some time now, and question the integrity of its seemingly ad hoc application.   I hereby offer up a list of seven likely root causes (expressed in the “fictional” first person), behind this cultural phenomena.

Posted by Charlie Greenberg at 11:18 AM