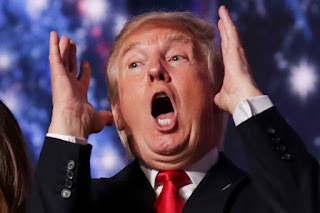 My plan was not only to cease posting humorous (and irritating), Facebook-Trump posts, but eradicate all existing FB posts after Hillary won the election.


But given the over-performing popular vote decidedly taking it up the canyon in California, plus the rust-belt, alarmingly between tetanus shots,  I  (as a  Never-Trumpite),   must now give my Timeline some breathing space, a chance to heal -  and celebrate other less polemical, less combative creative efforts while emphasizing family pictures (preferably of me), and lots and lots of dog pictures of the Weimy persuasion.


Which is all to say my Facebook Timeline has been utterly expurgated - not to mention decisively expunged -  of all Trump commentary. For those of you  who think I'm converting to complacency or have overdosed on Pepto Bismol, FEAR NOT!

For given that this is the time for end-of-year, Best-of-Lists, I am compelled to compile my favorite, 20 Best Trump Posts for 2016!, based on two major criteria:
The following appear in Chronological Order, beginning in July, 2016:

1. July 11: I propose if Hillary Clinton loses the election, Donald Trump should move to Canada.

2. July 11: Y'know, if Trump hadn't existed, Rod Serling would have had to create him.

3. July 21: Hey TED CRUZ, GET A GRIP!! lot's of things are said in the heat of a primary campaign. Y'know, like your wife's too ugly to be a fashion model, you're an ineligible foreigner WHO CAN'T run for president - your Cuban father was a co-conspirator in the JFK assassination. Y'know like, just lighten up, will yer

4. July 21: Based on confidential sources, look tonight during Trump's acceptance speech for announcements on appointees for cabinet assignments - including BEN CARSON for the newly created post of EXORCISMS.

6. August 2:  Now that Trump is saying Hillary is the "Devil", I suppose the burden of proof is on her to produce a Terra Firma birth certificate.

7. September 26: #debatenight  Latest instruction to audience: "Please refrain from sucker-punching the person next to you".

8. September 26: #debatenight Reportedly, Trump will accuse any Democratic Viagra users of having a rigged erection

9. October 19: #debatenight And it's about to begin. Praying for commercial interruptions - and an appearance by Alec Baldwin.

10. November 6:  As a sometime professional lyricist, I feel obliged to say "BLOW ME, COMEY!!"

11. November 9:  #recount I DEMAND A RECOUNT!! Starting w/ half the voter's marbles.

12. November 9:  Trump will probably be good for manufacturing, given how much he likes to make stuff-up.

15. November 12:  JUST STOPPED AT BOTTLE KING. Thought I'd buy some Spanish wine before it's deported

16. November 12:   PERSONALLY, I'M READY FOR AN INTERVENTION. Or as some people like to call it, mid-term elections.

17. November 12:  OK, TIME FOR OPTIMISM! FOR EXAMPLE, "Draining the swamp in Washington" could be all about Trump's first EPA directive!

18. November 13: WAIT, WAIT, there's more! Based on his own experience, Trump will put in place ACCOST CONTROLS.

19. November 14:  THIS JUST IN!!: GIVEN THE FAILURE TO PASS THE CASINO BILL IN NORTHERN JERSEY, TRUMP HAS STEPPED UP PROMOTION FOR OFF-TRACK RACE BAITING. (Believe me, it's true..it's true).

Dear Santa,
Can I please have a new Precedent Elect with an off-button??

Posted by Charlie Greenberg at 5:30 PM