CD recordings are running their course. 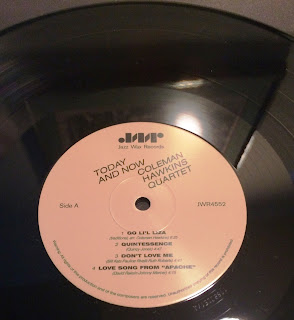 MP3 and digital downloads have been chipping away at the CD market for well over 10 years.  Brick and mortar chains have substantially reduced their CD inventories   (e.g., Barnes& Nobles, Sam Goodies), or disappeared into the ether (Border Books, Tower records).

Sure, the internet creates downward pressure on store-based inventories across any industry, across product lines.
But music is different. If you don’t want to wait for Amazon to deliver a CD, simply download everything electronically.  Don’t want the entire CD?  Pick your favorite tracks for immediate download gratification. (The same thing, via pdf, is happening with sheet music).

But Vinyl is back in a big way – revitalized and spinning its music in an analog, audio-format many consider more natural to the human ear.  Vinyl’s 12-inch platter, its ridged, groovy look and feel is irresistibly nostalgic.  And in comparison to CDs – it’s download-proof.

SIDEBAR: Forbes noted that sales for vinyl recordings had increased 260% between 2009 and 2015.

Yes, your new turntable may provide an out-of-the-box, USB port with entry-level, SoundForge software to help digitize your tightly held collection of 1970s Nonesuch classical records.  But why bother transferring to digital when you can actually start - from the ground-up -  pre-ordering pianist, Seong-Jin Cho’s recently produced, Debussy vinyl recordings.  And by-the-way, Nonesuch, in fact, is back to producing vinyl recordings.

New vinyl recordings, however, are typically more expensive than CDs. They have tighter inventories and provide a relatively smaller product catalogue, suggesting an imbalance between supply and demand.

Having spent time recently at Portrait Recording Studios   as part of an original CD project (please feel free to sample a couple of new songs via ReverbNation), I was advised that creating CDs is decidedly more cost effective a process than vinyl recording production;  especially when converting  a final recorded master from digital to analog.  In fact, pressing a single record may cost up to $200.00 per side.  What’s more, vinyl manufacturing resources are still thin, and may require a lead-time of 4-6 months to deliver.  But, if you’re a recording artist who can’t see his or her name in lights, the much larger album fonts, actual readable liner notes- and increased real estate for graphics - are tempting.

None of this is germane to vinyl fanatics, however, who may be throwing away Beatles CDs, deleting MP3s and buying the newly re-pressed, Sgt Peppers album. (In fact, Paul McCartney never much cared for the digital remastering of the early Beatle recordings, especially since added clarity and track separation sometimes shined an unfavorable light on the execution of harmonies).

But seriously, with increased market adoption, there’s a good chance the music-buying-youth of the world will finally understand, recognize and come to enjoy the many extraneous sounds derived from putting needle to record. Consider just a few of vinyl’s theatrically employed clichés for videos and commercials.

·         The sudden yanking of the tone-arm, scratching the record.  (Often used as a metaphor for interrupting an inadequate product/service or a “shut-up” to a boring announcer or untruthful politician).
·         The ending, non-audio record space that just scratches along . (Used dramatically to indicate someone’s not home, dead-drunk - or just dead).
·         The skipping record (Used to indicate inattentiveness, or for comic effect, as when the skipping record interrupts some couch romance).

It doesn’t get any more nostalgic than that.
Posted by Charlie Greenberg at 10:54 AM